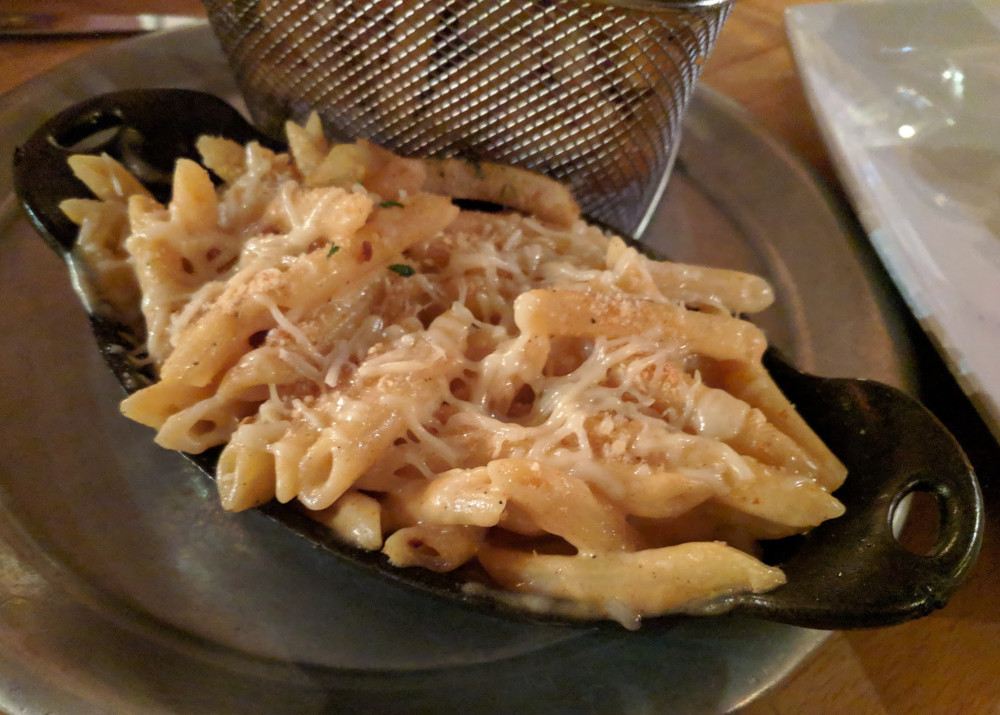 Nikki and I were craving some simple burgers, and my sister recommended that we try out a burger joint called "8 oz Burger and Co". So we stopped by, and noticed that they had Mac and Cheese on the menu. So we ordered up some burgers, with a heap of Mac on the side.

This is yet another Mac and Cheese that didn't use macaroni noodles. The restaurant opted to use penne noodles instead, which I guess is at least macaroni-ish. This isn't a big deal, but I always feel like bringing this up. :) Anyway, the Mac arrived, and I was optimistic. The noodles were cooked to a perfect al-dente bite, and the cheese that they chose for their sauce was the Beecher's flagship cheese, which is positively delicious. But then, and I have no idea why they do this, but they then added a bunch of cinnamon to the dish. The sweetly spicy funk of the cinnamon really threw off the cheese's flavor, and also gave the sauce an almost glue-like texture. After a few bites, I started getting grossed out, and I don't think we finished it.

So yeah. The Mac ended up being pretty gross, and I definitely wouldn't recommend it. What I would recommend, however, is their burgers. I had been craving some spicy food ever since Nikki and I landed in Seattle, and this place had a burger called the "Pike", and it used a habanero jam on it. It was exactly what I was hoping for. :)