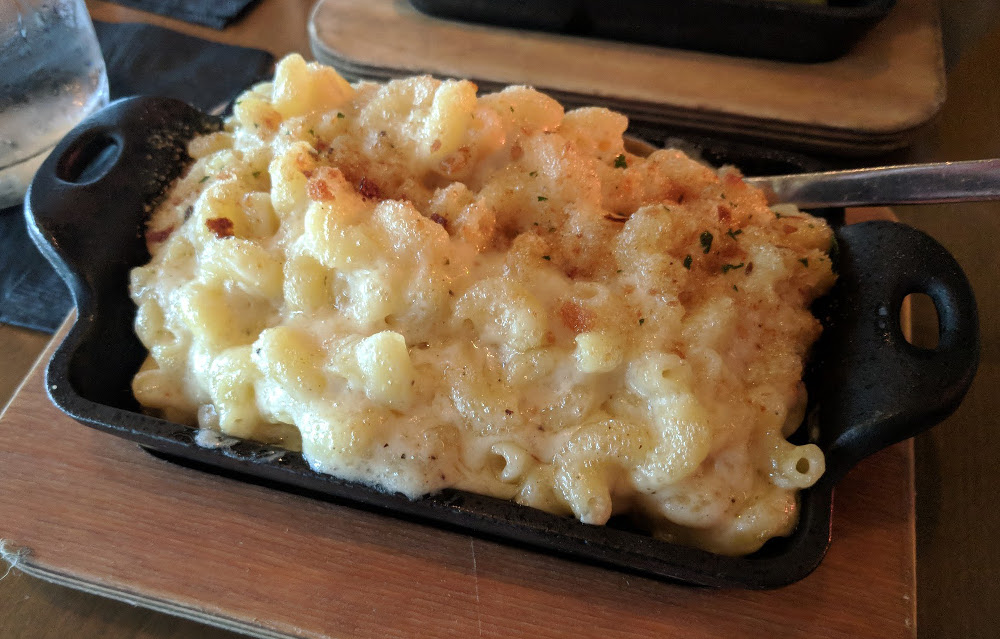 Nikki and I ended our trip in Las Vegas. Now, we knew that Vegas has a LOT of food options, but we were wondering if any of them were exceptional at Mac and Cheese. So I messaged one of my coworkers who lives in Vegas, and he recommended a small joint called "Carson Kitchen", located in the Las Vegas downtown. So Nikki and I headed on over, and checked this place out.

The front entrance of this restaurant is very nondescript. Nikki and I actually walked past it the first time. But once we found it, we went in, grabbed some seats, and pored over the menu. They had a LOT of tasty-sounding things on there, so we ordered up some beers, their deviled egg appetizer, some mac, and some baked red radish thing. (The entrees are served to the middle of the table, so Nikki and I got to try out everything we ordered.)

The appetizer came first, of course. And the deviled eggs were stunning.

Like, really. Stunning is the only way to properly describe these eggs. The perfect amount of bacon. Just the right seasonings. These things really set the stage for the rest of the meal. Because...

Next up were the main courses: Nikki's baked red radishes, and the Mac and Cheese.

The baked radish dish was very tasty. The radishes didn't have the sharp taste that I usually associate with radishes, and were instead a nice, buttery, almost potato-like consistency. The cashews were cashews. ¯\_(ツ)_/¯

As for the Mac, it was fantastic. The sauce was based on white cheddar, monterey jack, parmesan, and boursin cheeses. The combo was creamy, and tasty, and amazing. I've never had a Mac that used boursin cheese before, but wow. It's obvious that the chefs at Carson Kitchen care about their Mac, which is just the best.

Because the serving sizes were actually pretty reasonable, Nikki and I both had room for desert. Which is a good thing, since their donut bread pudding, with a three rum caramel, and glazed with a vanilla creme anglaise... probably ranks in the top 10 things I've eaten in my life.

Overall, this was a fantastic meal, and one that I'll remember for a while. Nikki and I are going to have to try mixing boursin cheese into our recipes at home, since Carson Kitchen did such amazing things with it. I would definitely come back here in a heartbeat, and anyone who passes through Vegas should definitely check Carson Kitchen out!