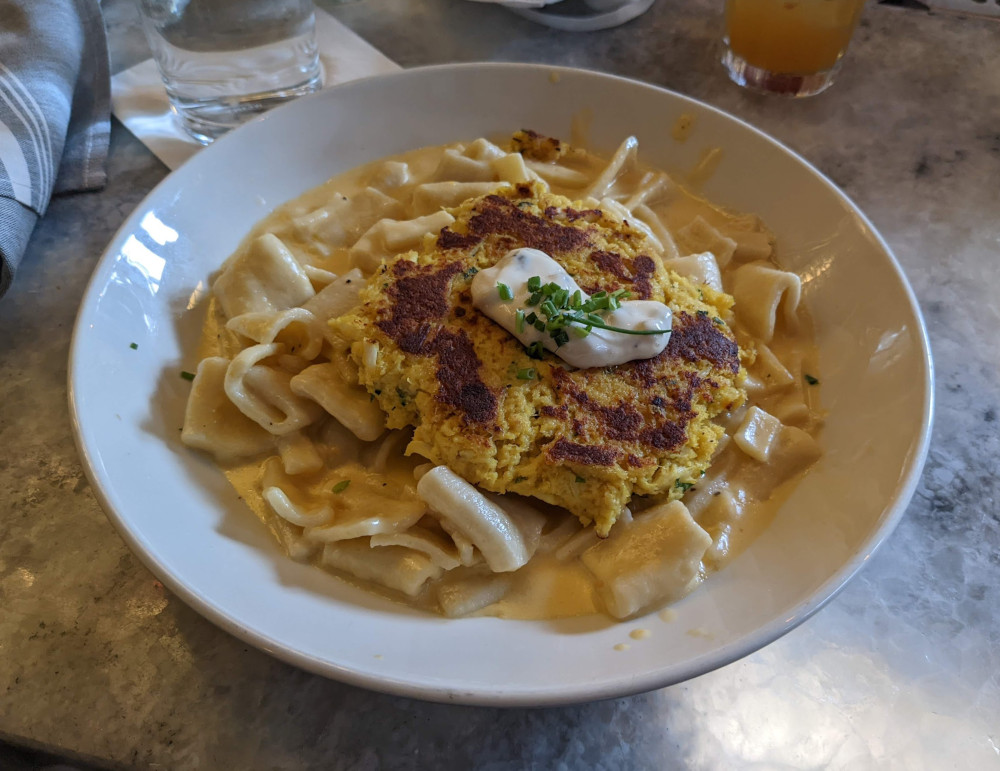 Nikki and I travelled to Washington DC to do the tourist thing and peruse the National Mall while looking at a bunch of famous monuments. But we also went there to add our first US district to our Mac and Cheese list! Today we went to "Founding Farmers," a farmer-owned super swanky restaurant that's walking distance from the Washington Monument!

We grabbed some seats by the bar, and ordered up some cocktails. The bartender was super cool, and took our meal orders quickly: I got the "Crab Macaroni & Cheese" and Nikki got the "Ham, Apple & Peas Macaroni & Cheese." Both dishes used the restaurant's seven-cheese sauce, which has white and yellow cheddar cheeses, gruyère, muenster, parmesan, ... and I can't remember the other two. It's no matter - when you start including that many cheeses, it's mostly a marketing gimmick. When you actually taste the sauce, the only thing you'll make out is: "yep, that's cheese."

We got our respective dishes, and I have to say, they were both pretty good! Instead of macaroni noodles, they opted to use their own made-from-scratch flat noodles. The flat noodles were good and thick, and cooked reasonably well, but I would have rather had something more... macaroni-ish. The cheese sauce tasted like cheese. (Shocking, I know.) And the crab cake on top of the dish was pretty dang tasty; Nikki especially loved it, saying that it was one of her favorite crab cakes that she's had! The Ham, Apple and Peas dish was great, but the cheese sauce was a little thinner in that dish, and pooled at the bottom of the bowl.

Overall, this was a fine meal, albeit a bit pricey. Still, if you're in the DC area, and thinking about Mac and Cheese, maybe check the Founding Farmers out!