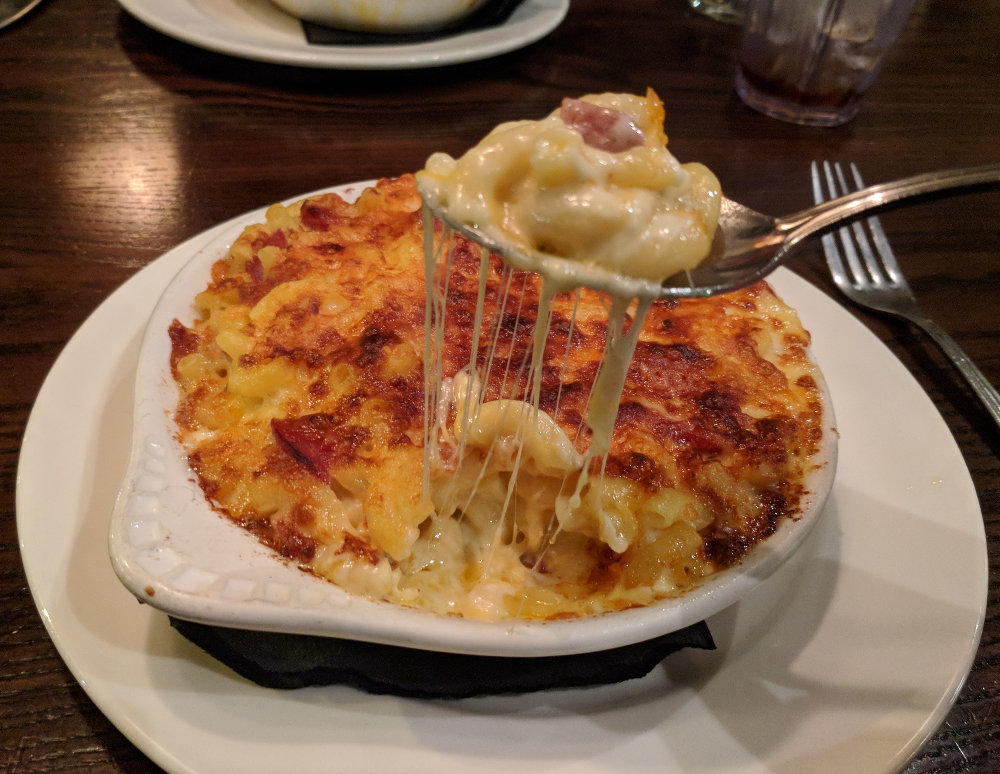 It's been awhile since Nikki and I went out for Mac and Cheese, so we decided to live it up and try a place that we had been looking at for a while.

Jack's is an interesting place. It's setup looks kinda formal, but the vibe is very casual. To get a feeling for the people who run this place, I suggest that you read their website's "Meet the Brothers" section.

I got the "Hot Dog Mac", which is their Classic Mac and Cheese recipe with hot dogs mixed in. The Mac and Cheese itself was very good. The sauce was a blend of asiago, mild cheddar, sharp white vermont cheddar, and mozzarella cheeses, and it just came together amazingly. The mozzarella cheese itself was a great choice, because it really amped up the Mac's stretchy stringy cheese game. (I mean, just look at that picture!) The hot dogs themselves were cooked until firm, and cut into half-moon shapes (just the way I like them!), which helped bring a little bit of extra texture to the Mac. The only negative that I had was with the crust: I'm not a huge fan of burnt cheeses, and the crust had a slightly burnt flavor.

Nikki tried their Chili Mac, which is basically the same sauce, but with chili instead of hot dogs. (Surprise, surprise.) She loved it, and would rate it a 5 / 5. The onions on top were a bit much, but were easily scraped off.

All in all, this was a very good Mac experience. It's always nice when a restaurant loves its Macs just as much as you do! We will definitely be coming back.

UPDATE: Nikki and I went back to Jack's on Dec 28th, and it was amazing, so I'm bumping the score to a 5/5. (It was previously a 4/5.) I got their bacon mac, and after trying that, I'm thinking that our previous visit might have just been an off day. I won't go into too much more detail. I'll just let the picture speak for itself.