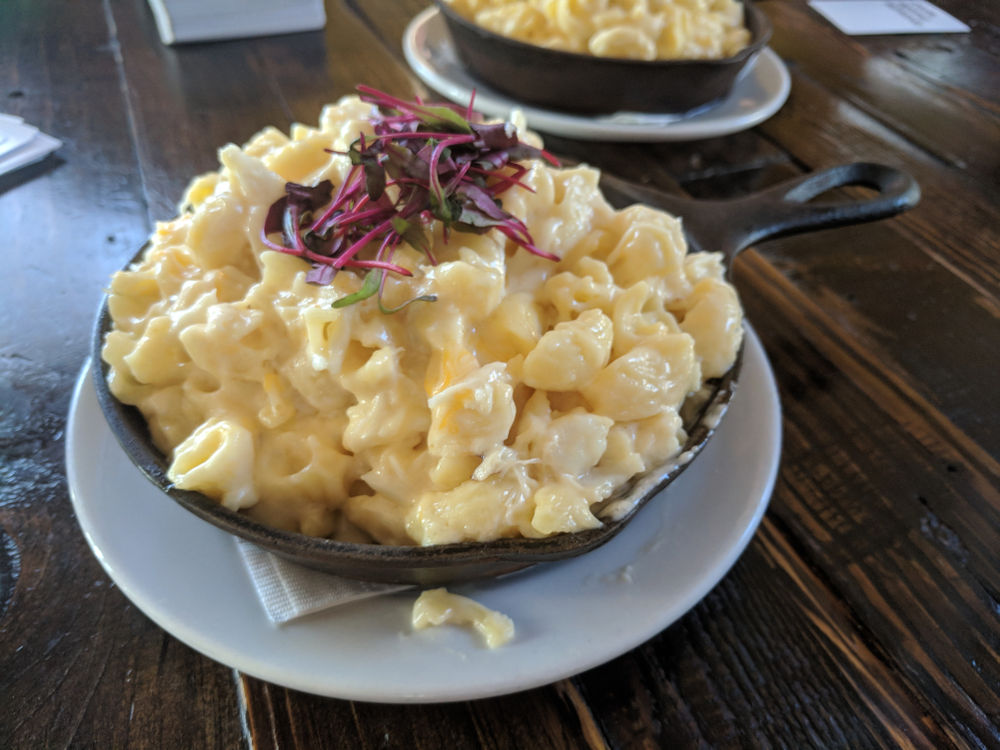 Nikki and I headed up to the Sacramento area for the weekend, to celebrate my sister's birthday. She took us to a bar that she likes in the Sacramento Midtown area called "Kupros Craft House". The goal was to grab a few beers, and play some "Cards Against Humanity" with my family. (Mom won BTW.) However, I saw that their Happy Hour menu included a House mac and cheese, and their specials list included a Crab mac and cheese. And so, of course, Nikki and I just HAD to try them. :)

After a few rounds of our game, the Macs were delivered, and we were surprised that they were delivered barely lukewarm. They were in an iron skillet, but that skillet was only room temperature, so I'm pretty sure this was just a plating strategy. In addition, the macaroni noodles were falling apart since they were a tad bit overcooked. It's too bad too, since the cheese sauce was pretty tasty. I asked around for the cheese list, and after asking the bartender, and several waiters, I went downstairs and asked one of the chefs directly. He said that the sauce was made from a blend of Colby Jack, Swiss, and Cheddar cheeses. It's an interesting combination, and it gave the sauce a real gently, creamy, and pleasant bite. I could imagine hot dogs doing real well in this sauce... Also maybe a little more salt...

We ordered both the House Mac and the special Crab Mac for the table. I didn't notice any difference with the sauces. The Crab mac just had a slight hint of crab meat added. (Nowhere near what I was hoping for...) So, I prefered the House Mac, personally. But, I'm glad I tried it.

And aside from the Macs, it was a real cute bar! Good selection, friendly staff, and they have this thing called "Can Roulette", where you pay a buck less for a random can of craft beer, instead of picking a specific one. Neat concept, but you better like IPAs if you chose to do this... :)